Pang-Ni (pronounced “Bonnie”) is a recovering Big 10 mascot and daughter of an Asian Tiger Mom and a Southern Military Cop Dad. 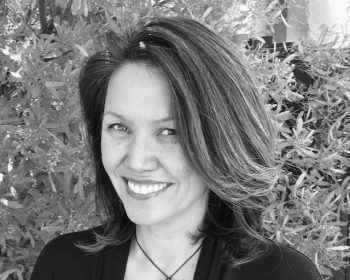 Originally from Taiwan, Pang-Ni grew up on bases in South Carolina, Texas and Germany. After graduating from Northwestern University, she moved to Hollywood and landed a production assistant job where, after getting the showrunner’s order wrong, she quickly learned the difference between an iced mocha and an iced blended mocha. Thankfully, she still got promoted to writers assistant and eventually script coordinator.

Since making her writing debut on The Brian Benben Show, Pang-Ni has written for TV (Malcolm in the Middle, Six Degrees), the circus (literally worked with clowns), and storytelling apps. She has sold pilot scripts to Sony, E! and ABC. A graduate of the Warner Bros. Writers’ Workshop and the PGA’s Power of Diversity Workshop, Pang-Ni recently finished writing for the Netflix comedy, Team Kaylie, is a Co-Producer on Nickelodeon’s Drama Club, and currently serves as Vice Chair of the Asian American Writers Committee at the Writers Guild.

She is repped by Brandy Rivers at Industry Entertainment. You can find her on Twitter and Instagram: @pangni

I came to Script Anatomy because I was looking for a way to connect with serious writers and professionals as well as hone my skills — especially when it comes to structuring. The Televisionary course covered the basics of TV writing in-depth with many thoughtful examples and gave me the confidence to tackle those elements of structure that I once struggled with. Pang-Ni in particular is such a considerate instructor because she took the time not only during but outside of class to answer any questions we had and share her story. Because of her guidance, I left the class with a solid outline that I can’t wait to take to draft!

Before taking Televisionary, I didn’t have a clue on how the structure worked in television writing. In Pang-Ni’s class, I learned the basics of structure, A-B-C storytelling, and how to write an outline. With that outline, I eventually wrote my first pilot script. Now I’m ready to start a second pilot and I’ll be returning to the tools I learned in Televisionary to get started.

Even though I was a complete novice, Pang-Ni’s instruction was accessible, inclusive, and supportive. Her notes were incredibly thoughtful and actionable, and she was very generous with her time, often staying online after class ended to answer individual questions. Pang-Ni shared her extensive comedy writing and industry experience with the class, pulling back the curtain on what it’s like to be a working comedy writer. She creates a very positive, welcoming, safe space, and I would absolutely take another class with her.