Jeremy grew up in San Diego on a diet of baja fish tacos and bean and cheese burritos, an addiction that has kept tethered to Southern California his whole life. 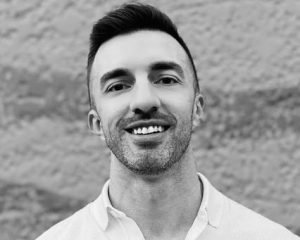 Fortunately, his other passion — storytelling — has allowed him to find a career in that delicious part of the country writing and producing on such TV shows as Good Sam (CBS), BH90210 (FOX), and Rizzoli & Isles (TNT), in addition to podcasts and the Game of Thrones video game. Having lived half his life in the closet (despite the many, many clues), he’s drawn to stories about otherness and identity, exploring those character dilemmas across a spectrum of genres from the intimate to the epic.

Jeremy’s entire career path can be traced back to a scheduling error in high school that landed him in a Digital Media Production class instead of AP Chemistry. It was there that he discovered filmmaking to be a lot more fun than the periodic table and decided to pursue a life and livelihood in the arts, starting with going to film school at Chapman University. Before he finally made it” as a full-time TV writer, Jeremy worked in other areas of the entertainment business including a development role at the ABC Studios POD Random Hill Productions where the company sold 11 shows to broadcast and cable buyers during his time there. Prior to that he worked in comedy, co-producing a standup special for Joe Rogan, and at Kevin James’s production company through the development and release of feature films Paul Blart: Mall Cop, Zookeeper, and Here Comes the Boom. He was featured on The Tracking Board’s Young and Hungry list and was a finalist in the 2018 Warner Bros. TV Writers’ Workshop.

He’s repped by Verve and Zero Gravity Management, and you can finding him wasting far too much time on Twitter @jeremysvenson

Jeremy is new to Script Anatomy, so testimonials will be coming soon!