Alex Raiman was firstly Script Coordinator on The Magicians (Netflix/Syfy), then Writers’ Assistant. But then his spec feature caught the attention of the showrunner, and he was hired as a writer. 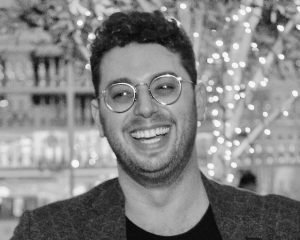 A writer and director, originally from New Jersey, Alex started out as a graduate in film/video from Penn State. With his writing partner Jay Gard, he moved to LA to work with the writer/director Joe Carnahan where he helped produce the feature Stretch (Netflix) and several television projects like Those Who Kill (A&E), The Blacklist (NBC), and State of Affairs (NBC) where he became Writers’ Assistant.

It was on The Magicians that he broke in as a writer, though. With Jay, he wrote a psychological drama based on an infamous suicide cliff in Australia, and The Magicians showrunners Sera Gamble (You) and John McNamara (Trumbo), quickly offered Alex and Jay the opportunity to write for the series. They wrote there for three years.

Alex has since developed projects from comedy to period and genre. In 2019, he sold an original dramedy called Group to Warner Bros TV based on his life experiences. In 2020, he created a scripted anthology series for TIME Studios based on their iconic Person of the Year brand, which they are currently developing with Likely Story and Sugar 23.

Recently, Alex and Jay were hired by Warner-Discovery to develop their brand strategy and create scripted content for the 2021 upfront presentation, working with talent including Leslie Odom Jr., Henry Winkler and Conan O’Brien. They have also partnered with Trumbo scribe and The Magicians showrunner John McNamara to develop an hour-long alien arrival series with an unexpected twist called The Ambassador.

In his spare time, Alex volunteers as a Crisis Intervention Counselor for the National Suicide Hotline. An avid animal-rights advocate, Alex has two dogs, both named after characters from Game of Thrones.

He is repped by Circle of Confusion and you can find him on Instagram at @alex.raiman.

Alex is new to Script Anatomy, so testimonials will be coming soon!