Stefanie Woodburn told the Internet she hated cats on her first Twitch stream, and it was all downhill from there. 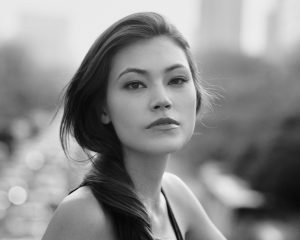 Well, not all downhill. Twitch was also the key to Stefanie’s success as a writer and performer. As the host on Twitch for Geek & Sundry at Legendary Digital Networks, she built up a following who helped her create the first film to be funded entirely through playing video games. Pole went on to become an official selection in 18 film festivals, winning 5 awards.

Originally from Maryland, Stefanie is a half-Chinese half-Danish/English/Scottish writer/performer with a dance and theater background. She graduated from NYU in International Politics & Economics, working a variety of jobs from a business consultant to at a rock-climbing wall, before moving to her dream creative space. After exploring pole dance, skydiving, and swimming with sharks, she found she loves writing about characters who take risks in their life and can laugh through failure.

A huge nerd, she’s spoken on Comic-Con, WonderCon, and TwitchCon panels about gaming, hosting, and content creating. She produced a board game doc called Gamemaster, and was the subject of a game documentary The Kids Table, about competitive bridge (their average opponent was 73 years old).

She has written on a Blue Sky Animated Feature, the feature ONE IN A BILLION, as well as in the mini-room for American Pie Presents: Girl’s Rule. She is currently writing on CBS’ new dramedy SO HELP ME TODD premiering Fall 2022.

She is repped at Verve. You can find her at Twitter and IG @StefWoodburn.

Stefanie’s unique and holistic approach to craft makes her classes a joyful experience. Like all the best writers, she gives the best feedback. As an instructor, she’s patient, generous and always finds the most creative and exciting way into a story.

Stefanie Woodburn is an amazing teacher! This class was exactly what I needed to take my project to the next level! With Stefanie’s thoughtful and detailed notes, you can’t fail. Before taking the Feature Lab Development course I would dread outlining. Now that I have the script anatomy tools I have the capabilities to construct a blueprint that will give my script a solid foundation. Writing is most certainly a tedious process and having someone like Stefanie there to collaborate with is an incredible advantage. She brings a wealth of knowledge from her personal experience in the industry and really encourages you to dig deep into your unique POV. I highly recommend her class!

I took the Feature Film Development course with Stefanie Woodburn. Stefanie did an incredible job leading our class. She had the perfect balance of encouragement and enthusiasm, while still challenging us to dig deeper and elevate our stories. I know my script is worlds better having completed this course than it would have been on my own. Much appreciated!