Spiro Skentzos wrote a script for his Star Wars figurines as kid. He was also the drummer in an all-girl garage band. Only one of these things led to a career. 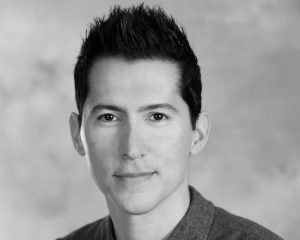 The Star Wars figurines were at war with his sister’s giant Barbie dolls – The Star Wars figures won—those Ewoks have mad skills. That screenplay was the first of many.
Spiro grew up in the Midwest speaking Spanish, Greek and English at home, and graduated from the University of Michigan, majoring in Art History, with minors in Biology and Film. He wanted to make documentaries, but they took forever to produce, and once he came to LA, he fell in love with TV—getting a show in the can in seven days really spoke his instant gratification.
He submitted his feature script to the Ohio Independent Film Festival and won Best Original Screenplay. The prize money was enough to cover one month’s rent in LA at the time, but more importantly it encouraged him to keep writing.
His professional TV writing career began in comedy, writing episodes of ABC’s George Lopez, where he started as an assistant. He then co-created and co-wrote the animated sci-fi/zombie web series Chadam, a cult-fav based on the eponymous character. Wanting to dive deeper into character in hour-dramas, he applied to and was accepted into NBC’s Writers on the Verge Program, which ultimately opened the door for him to spend two seasons writing on NBC’s Grimm. He’s also written on the hit CW series Arrow. He’s sold three pilots, and written a psychological horror feature for Mar Vista. He currently has several projects set up with producers.
To help inspire the next generation of writers, Spiro created and produces the “Intro to TV Writing” panel at San Diego’s Comic-Con, currently in its twelfth year. Spiro co-chairs the WGA’s LGBTQ+ Committee, and is on the steering committee of TTIE— The Think Thank for Inclusion and Equity.
He’s still obsessed with Star Wars, as you’ll see from his posts, along with his love for writing, chocolate and anything geeky. Find him at @spirovisionproductions.

A quick note to say how much I enjoyed Televisionary with Spiro. He was so insightful and encouraging. And we had the extra bonus to have Molly Coogan as our pseudo-student teacher – such a treat. Thanks for a great course!

I have heard about Script Anatomy for years but have never taken a class. I even follow Tawnya on social media. One of my yearly goals was to take a class to work on my limited series pilot to get it into shape. When I enrolled in the class, I was relieved to know that I would achieve another goal for the year. When I started the course, I was already familiar with drama writing however, the information and the tools given were extremely helpful. Working with Spiro was great because he eagerly and effectively answered all of my questions. I feel even more confident in writing a pilot now and would definitely take another class.

After waking up to work on my homework from Spiro’s class, I found myself going back to the concepts, structure, anecdotes from our sessions. It was extremely fulfilling and empowering to apply the “craft” to what otherwise felt like hard to corral energy. Thanks, Spiro. It’s so clear you know what you’re talking about, and you care, and I’m really grateful for this experience and opportunity to learn from you. You teach really well.