The daughter of a spy, Omaira has always had a curious spirit and a zest for investigation. 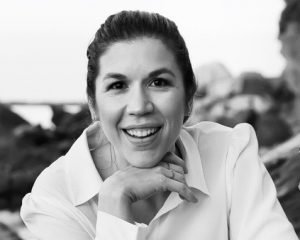 Originally from everywhere from New York to Germany, she mostly grew up in small-town Texas where her love of trespassing into all places “haunted” left her with many interesting stories and scars.

After graduating from University of Texas-Pan American where she studied Communications, and worked briefly as a journalist and academia, she shifted from fact-checking to fiction. She got an MFA in screenwriting from the University of Southern California, and in 2011 became a fellow of the NHMC Writers Program.

Her first staff gig was for The Kitchen Musical (AXN Asia). The room was ahead of its time meeting virtually on Skype before virtual writers’ room became all the rage. This unique opportunity was offered to her by a former grad school colleague who was running the show back in Singapore and wanted to work with writers whose work she knew and trusted.

She has since written for Station 19 (ABC) and East Los High (Hulu). She recently wrote a freelance episode of the animated series VICTOR AND VALENTINO (Cartoon Network) and is currently writing for a mobile role playing game with Landshark Games. She also wrote for two STARZ mini rooms for Family Crimes created by David Ayer and a soapy remake of the telenovela Teresa.

In addition to teaching, Omaira is a mentor for various talent development programs and MFA cohorts including Warner Media Access, NHMC and Stephens College. For her own writing, Omaira likes to take dark topics and treat them with a light hand – think deep psychology with unexpected twists. You can find her mostly dormant on IG @omigal.

Omaira’s classes are always the first ones to sell out. As someone who has taken several of them, I can tell you exactly why — she is a fantastic instructor who is truly gifted at helping writers see their stories more clearly and deepen them with added layers of emotional resonance and character development. I have learned more from receiving her notes than I have from entire classes taken with other instructors. Furthermore, she’s also wonderfully kind, accessible, and clearly invested in the success and happiness of her students.

Omaria’s warmth made it quite easy to open up about ideas without me feeling like my ideas were awful. She was great at explicitly pointing out where something in my story lacked or might need a little cherry on top to make something more impactful. I have taken a writing class previously and Script Anatomy was extremely different. My previous writing class was great, but Script Anatomy really helped with pulling out my ideas with the various worksheets that were given throughout the course. I’ve had so many writing breakthroughs through SA and I appreciate Omaira for graciously assisting me through the process. I look forward to taking another class with SA (specifically with Omaira).

Omaira was very committed to understanding student’s projects and awesome at hanging in with vague, challenging, or weak story outlines (including mine!) and providing very thorough feedback. She presented info clearly and was SUPER encouraging.