A Bay Area native, Molly was raised by a single mom so she never felt weird about tampons or being in charge. 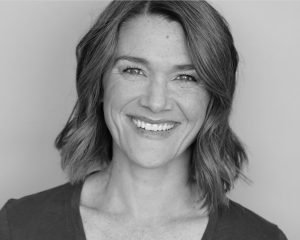 A lifetime theatre nerd, she trained as an actor at Bates College in Maine, studied in London and Jamaica, and then hightailed it to New York. She spent over ten years working as an actor with places like The O’Neill and The Williamstown Theatre Festival she also taught theatre to inner city kids and incaracerated youth through The 52nd Street Project and Drama Club NYC.
After training at UCB, she realized her passion was telling her own stories.  Her web series Things I Hate won Best Comedy at the NBCU Short Film Festival in 2016. Her viral sketch comedy videos have garnered hundreds of thousands of views and have been featured on Huffington Post, BuzzFeed, E! and Jezebel.  She’s written food jokes for Michelle Obama’s show WAFFLES & MOCHI and her short films have won awards and screened at festivals like the Mill Valley Film Festival, Cleveland Film Festival, Women in Film Shorts Night, SCAD, internationally at CIFF, and more.
She was a semi-finalist for NBC’s Writers on the Verge and ABC/Disney’s Writing Program and is a proud alum of the Warner Brothers Television Writers’ Workshop as one of only two comedy writers selected for the program.
She currently writes on PIVOTING for Fox and has a streaming show in development.
Her reps are Brandy Rivers @ Industry Entertainment and attorneys James Feldman and Ayo Adeyeye at Lichter Grossman Nicholas Adler Feldman Clark. You can find her on Instagram at @mollyannecoogan.

Molly’s class was one of my favorite I’ve taken at Script Anatomy. She’s engaging, hilarious, and excellent at articulating screenwriting concepts in a way that is easy to understand and immediately applicable. Her notes were incredibly perceptive and helped me hone in on the emotional core driving my story. I will be taking more classes from her in the future!

Molly Anne Coogan gave me the most thoughtful, concrete, and useful feedback I have ever received from a writing class. She really helped me to address my blind spot – getting really concrete in my characters’ flaws, goals, and motivations – enabling me to take my pilot from merely a concept to a detailed outline, ready for scripting.

I’ve taken my fair share of classes (Script Anatomy and otherwise) and Molly’s class was by far my favorite. She is one of the rare few that isn’t only a great writer, but a fantastic teacher as well. I can honestly say that her notes (along with the way she ran her class) helped me transform my pilot. If you have the chance to take any of Molly’s classes, you will come out the other side a better writer.