Marc Warzecha’s first job in entertainment was as a pro wrestling ring announcer in Detroit. (It paid $25.) Luckily, things got better. 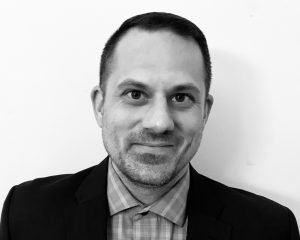 Marc was hired by The Second City comedy theatre as a writer/actor. Those shows paid $35. And it was less likely that you’d get hit in the head with a folding chair. At The Second City Marc was able to immerse in his passion for comedy writing, and particularly social and political satire.

Along the way Marc also found a passion for teaching writing. He has enjoyed being an instructor domestically and internationally: Marc was a guest lecturer for the Comedy Central network in Spain (Paramount Comedy), guest director at Yoshimoto Comedy in Tokyo Japan, and guest instructor in Norway and Latvia at the request of the United States Embassy.

Marc is such an outstanding instructor. He brings such a vast knowledge of comedy, writing and television. Before taking his Televisionary class, I struggled to make sense of any of the ideas rolling around in my head. With Marc’s help and guidance, I was finally able to breathe some life into them. Marc guides you through every part of the process with patience and encouragement. He always presented me with great feedback and new ideas that helped me improve immensely as a writer! I can’t recommend him enough!

I just finished up the Televisionary class with Marc Warzecha and he was an amazing instructor. You can tell he truly cares about helping all of his students improve and gives very actionable feedback and smart advice. I signed up for Televisionary, first and foremost, to improve as a writer. Beyond that, my intention was to get better at pitching ideas and jokes, get back into a situation where I would have to give feedback regularly and, of course, write an outline for my first spec. I’m happy to say I’ve accomplished all of those goals and more. Next up for me is the Spec/Pilot Draft Intensive. So, thank you Tawnya for developing this program! And thanks to Marc for his outstanding instruction! Can’t wait to see what the next class has in store.

Marc made the Televisionary Comedy Class fun and exciting. His feedback along with feedback from the whole class was very constructive and invaluable. After the last class, he was kind enough to offer to review one more outline for me which proved to be extremely helpful! I have taken writing classes before, yet the difference is that the tools in Script Anatomy were more concise and applicable. I’ve finished my first TV pilot which a producer at Austin Film Studios is currently reviewing!