Kyle Bown is a TV writer, web series producer and podcaster who spent the better part of a year in a (fictional) cult. 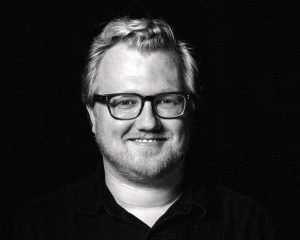 Born in Portland, he grew up just outside Sacramento, and moved to Los Angeles to take Political Science at UCLA. While there, he saw The West Wing and Buffy The Vampire Slayer and he realized he had to write for television. And when film school wouldn’t have him, he paved his own way.

A chance encounter at a showing of Wicked led to Kyle’s first TV job as an office PA on Moonlight. He then worked on many more shows before finally landing a gig as the assistant to showrunner Marlene King on Pretty Little Liars. It was a first-hand education in writing and creating television, from the Writers’ Room to prep meetings through shooting and post. Over seven seasons, Kyle eventually he co-wrote two episodes of his own, while also co-writing/producing the web series Twentyfiveish starring Brendan Robinson (Pretty Little Liars), and co-founding the podcast The Way We Nerd.

After PLL, Kyle remained at Marlene’s company Long Lake Media as a Creative Executive until the opportunity came to be a Staff Writer on the PLL spin-off, Pretty Little Liars: The Perfectionist.

Kyle is obsessed with video games, immersive theater, and his cat Goober. You can follow Kyle @kylebown pretty much everywhere.

How can I start recommending Kyle? Well, he completely changed my writing life. I started his class with a pretty strong notion and training in writing but in a very small amount of time he was able to elevate my writing like an angel. He taught me to strengthen my structure, have stronger characters, a more solid flow, and a kick-ass logline. His spirit and energy in class made it all extremely easy and exciting. I couldn’t recommend him more. RUN to his class.
— Rodrigo Varandas
Kyle really helped me to understand how to break a story. It was so fun to be in his class and so incredibly insightful. He used the materials and his own experience to make the lessons come alive and help my classmates and me understand the mechanics of breaking a story. Even though it was a group class, I felt like I got so much extra help from him, and I won’t forget that. Kyle is an excellent instructor and experienced writer who will give you great feedback and invest himself into the story you are trying to tell.
— Nicole Schwegman

The quality of Script Anatomy classes cannot be overstated, and neither can the quality of their instructors! Kyle is an incredible instructor. I took his Televisionary class after three years of winging it on my own. I wish I had taken a class with him sooner! Kyle is endlessly encouraging, extremely clear and insightful with his notes and through his teaching. Ultimately, Kyle’s class elevated my abilities as a writer from when I first started his class and the writer I emerged as. Equipped with the tools from Kyle’s class, I feel like I finally understood how to write an effective TV pilot, and my writer’s groups have definitely been noticing!