Jimmy Mosqueda was an early employee at Facebook, but he left just before his stocks vested. The secret to comedy is timing. 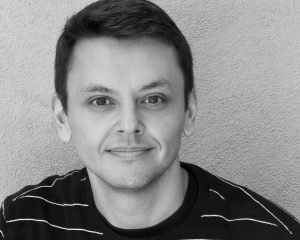 The youngest son of an eccentric Mexican-American family from southern California, Jimmy was neither especially athletic or popular in school. His friends called him “36 Wide” because he once forgot to remove the size sticker from his new jeans. But Jimmy doubled down on academics and was accepted to Stanford University, after which he landed that lucrative job at Facebook… which he left to become a writer.

Jimmy’s feature screenplays have placed in numerous contests, including as a finalist in the Austin Film Festival in 2015, and in the Script Pipeline and TrackingB competitions, and as a semifinalist in the Nicholl Fellowship. A Script Anatomy alum, he has participated in the Sundance Institute’s Screenwriters Intensive, Film Independent’s Project Involve, the 2017 National Hispanic Media Coalition TV Writing Program, and the 2018 Disney-ABC Writing Program, which he got into using a spec script and original pilot that were both developed at Script Anatomy.

From the Disney program, Jimmy was staffed on Schooled (ABC), a spin-off of the hit comedy, The Goldbergs, and he has since written on the second season of Legacies (CW). He is repped by CAA and 3 Arts and you can find him on Twitter at @jimmymosqueda

Taking Televisionary with Jimmy was one of the most informative, supportive, and eye-opening TV writing classes that I’ve ever taken. He provides everything you could want from a teacher: thoughtful feedback, enthusiasm, excellent time management, and expertise. I learned so much – including structure, story tracks, theme, character windows… – that I hope to have an opportunity to take a class with him again. He is a great member of the Script Anatomy community and a generous writer and mentor.

Holy cow! Jimmy’s Televisionary teaching was an absolute earth shaker of a class. He’s attentive, specific, and so mind boggling informative. He helped me follow my nugget of an idea to an absolute gold mine. With the tools and his keen narrative eye, I was able to untangle any of the structural kinks I came across in my series. This was first Script Anatomy class and I immediately signed up for another. Jimmy is an absolute rockstar.

Televisionary with Jimmy is the first real TV Writing class I’ve taken. He did an excellent job explaining the fundamentals of how to approach writing a pilot script in an easy-to-understand way. With his help I was able to write my first outline and am looking forward to taking it into draft stage. I really appreciated how thoughtful he was in helping each student develop the idea the story they wanted to tell. He was extremely supportive and available outside of class for questions. I would highly recommend his classes to anyone looking for thorough notes, a relaxed atmosphere, and a very knowledgable instructor!