In college, Hannah made short films by day and played bass in a punk rock band by night. 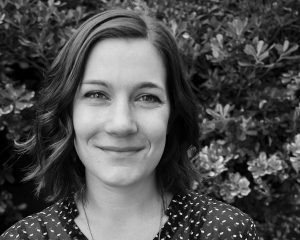 That’s how it was at film school at Columbia College, Chicago. The best part wasn’t hosting illegal basement shows and traveling the country in a beat-up Ford Aerostar, it was being a part of a team of artists working together to create something special. This passion for creative collaboration is what drew her to writing for television.

Originally from Bridgman, Michigan, she grew up watching The X Files, and self-published a novel in high school before deciding to study screenwriting and directing. A big sci-fi fan, she interned with the screenwriter Zak Penn (The Avengers) after graduating, working her way up from assistant to Vice President of his company. One of her childhood dreams came true when she worked as Script Coordinator on Steven Spielberg’s Ready Player One.

In 2018 Hannah made the jump to TV as the Writers Assistant on Jupiter’s Legacy (Netflix). She also attended Script Anatomy’s Pilot Draft Intensive and Advanced Spec Lab—check out her testimonial video— working on scripts that earned her a spot on the Young and Hungry List, and got her into the 2018 Warner Brothers Writers Workshop. Immediately after graduating from the program, Hannah was staffed on the CW series Legacies. Hannah is also the co-host of the Untitled Female Driven Podcast.

She is repped by CAA and Housefire Management, and you can find her on Twitter @HannahRosner.

Hannah is an incredible instructor. Not only did I pour over the notes she left me, but the notes she left all of my classmates. Her ability to laser focus on structure and guide each student toward more specificity is spot on. She put effort into her presentation and style of instruction–and I left the course feeling like I had actionable steps for my pilot and spec.

Hannah is a gifted writing instructor. She meets writers where they are in their story, regardless of writing level and provides thoughtful, constructive, detailed, and even motivational feedback. She was down-to-earth, flexible, and generous with her time.