When Grant Calof went to college, he expected to graduate in psych or law. He left higher education as a comedy writer. 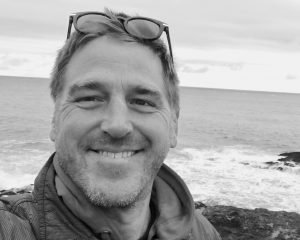 It was graduate school that turned him. He went to the Loyola Marymount University in LA, his native city. With a writing partner he started out writing feature comedies. But then the partnership lost steam, so he jumped ship, and turned his focus from comedy to female-driven sci-fi and psychological thrillers.

He got his break in the comic book world, writing The Hulk (Marvel). A fan of graphic novels, he wrote his own, and managed to not just sell the television and feature rights but write both adaptations. His latest graphic novel Eternity Kill, is currently in its fourth printing.

Grant sold his first three feature specs to Sony Pictures, Constantin and Disney. They weren’t produced, but his odds have improved since, as he’s moved into animation. A finalist for the Universal Studios Feature Writers Program in 2019, his last two feature scripts were finalists for the 2017 and 2018 Sundance Screenwriters Lab. He’s also written on All Hail King Julien, Dreamworks and Netflix’s Emmy Award-winning animated TV series. And he’s currently writing an $80m science-fiction feature for Proxima Films that’s casting for a 2021 shoot date.

Grant still misses Saturday morning cartoons, thinks summer ends too soon and dreams of a world without debt or drought.

He is repped at Industry Entertainment.

Grant is such a patient and understanding instructor! He cultivated a safe place for all of us to share our ideas, and fully encouraged each classmate to their full potential. His background knowledge in selling and pitching was also a plus, as he is so experienced in the world of film. I walked away with a great script outline as well as a fantastic relationship with him and my fellow classmates. The Feature Outline Course was instrumental in helping me understand feature structure, which was what I dearly needed. From characterization to theme, everything was covered in detail— and we even had enough time to discuss our projects and support each other as well! No matter what genre, there were numerous examples to help us along the way. Now I feel confident going forward into the first draft phase with the solid foundation I’ve built thanks to Script Anatomy’s tools.