At his first TV job Eric Rudnick pitched an idea involving a chimpanzee. His boss remarked, “that’s great, but how are we going to get everyone watching at home to take acid?” 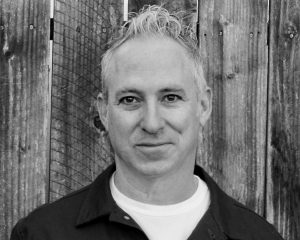 It was a reality show called Man vs. Beast on Fox. That’s how Eric got his start in TV, through a side door someone left open and onto productions like RuPaul’s Drag Race, Hell’s Kitchen, and The Biggest Loser. As a Challenge Producer, he helped pit people against each other for cash and prizes.

Raised in Massapequa, NY, Eric graduated with a Commercial Art degree from a community college, and played drums in a couple of bands for beer money. After moving to Manhattan and studying acting at The Neighborhood Playhouse and Playwrights Horizons, he began writing plays and his work has been produced in New York and Los Angeles. One of his plays, The Edge of Allegiance, became a web series which premiered on the front page of Funny or Die.

His move to scripted TV started when he won the ATX Festival’s Pitch Competition, which lead to developing a show with Fox 21 and Milestone TV & Film. He sold a show to TNT, a dramedy about an assisted living facility for Veterans, and he optioned a comedy to Fox about an investment banker who joins a traveling carnival. He is currently prepping his first feature as writer/director.

Eric digs volunteering with Young Storytellers and 826LA. He is a member of The Playwrights Union and Antaeus Theatre Company’s Playwrights Lab.

I signed up for this course because I’m a fiction writer who really wanted a better grasp of of how to craft stories for the small screen. When I started with Eric, I assumed the course would give me a few basic tools to make that shift, but really, I gained so much more. Eric gave assignments, feedback, and perspective that I’ve been using to build my scripts, and I feel way more confident than I did before about my story structures. Great workshop. I highly recommend it.
M'Shai Dash
The Televisionary course is the first course I’ve taken with Script Anatomy, and one of the best decisions I’ve made for my writing career. Eric is a great instructor and made it a point to understand my vision, and gave me really great feedback and ideas to develop my story to make it as sharp and as entertaining as possible. I’m delighted to take everything I’ve learned in the Televisionary course to write my next pilot and future projects.
Reginée Ceaser
View Eric's Upcoming Classes