Elysse Applebaum’s first writing gig in Hollywood was doing nametags for contestants on The Price Is Right. She knew she’d make it onto full sentences one day. 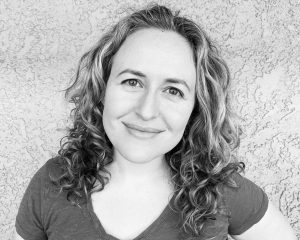 Born and raised as a Jewish liberal in Orange County, Elysse had a fish-out-of-water upbringing. She moved to LA to study Film & TV Production and Creative Writing at USC, and landed that sweet gig on The Price Is Right. But she soon got her real break into scripted TV as a showrunner’s assistant on Brothers and Sisters (ABC).

Over the years, Elysse’s drama and comedy TV writing has placed in a number of contests including Austin Film Festival (Second Round), Final Draft’s Big Break (Top 3) and Scriptapalooza (Finalist). She came mighty close to fellowships at WBTV’s Writers’ Workshop and NBC’s Writers on the Verge.

In her spare-ish time, Elysse is a mentor with WriteGirl. She’s a fan of Dodgers baseball, rescue dogs and snacks. She also trained in improv at the UCB and stand-up comedy at The Ruby LA.

Elysse is repped by Haven. You can find her on Twitter @yapplebee.

I was impressed from the start by our intrepid, affable, and extremely knowledgeable instructor, Elysse Applebaum, who led my Script Anatomy Pilot Draft Intensive. Elysse’s energy and enthusiasm really helped our class get excited about our own personal projects and was invaluable when we did the workshop portion of the class. Having a working scribe, such as Elysse, is so beneficial to furthering my television writing skills as she was able to provide relevant examples from her years working in the trenches on various shows. Elysse also was able to bolster my self-confidence by being positive and pushing me to go the extra steps and not take the easy way out with my characters and story. Elysse also provided extensive notes for each member of the class, both on a line level and as a script as a whole. She put in a tremendous amount of time and personal attention to reading and critiquing each of the three major submissions in class. I would definitely recommend Elysse Applebaum as a valued Script Anatomy instructor and would enjoy taking additional classes that she might teach in the future!

— Charlie Lyons
Elysse provided thoughtful, tangible, and constructive feedback for every member of our class. Through her feedback, I developed a firmer grasp of TV writing mechanics (e.g. formatting, structure), script pacing, and adding emotional depth to my characters. More specifically, Elysse instilled in me the importance of drafting rich character descriptions so that my characters pop off the page for my readers.
Elysse takes the time to make complex screenwriting concepts more accessible for beginner and experienced writers alike. I highly recommend her course to screenwriters from any level.
- Casey Horowitz, Script Anatomy Student
View Elysse's Upcoming Classes