David K. Kessler is a former stand-up comic who now specializes in writing screenplays based on true stories, biographies, books, and memoirs. 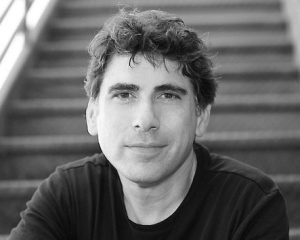 Originally from Philadelphia, David attended that city’s “Fame” high school, Creative And Performing Arts, where his classmates included QuestLove and Boyz II Men. He then graduated from Parsons School of Design in New York, and worked as a graphic designer for ad agencies, designed book covers, movie posters, and indie film titles.
He impulsively moved to Los Angeles in 2000 and became a stand-up comic for a while, performing at The Improv, The Vancouver Comedy Festival, and in sketches on “The Late Late Show With Craig Ferguson” and “The Showbiz Show with David Spade”. But he tired of comedy clubs after a few years and focused on writing instead. In 2006, his “Will & Grace” spec made it to the semi-finals of the Warner Bros. Comedy Workshop.
Switching to drama, he optioned the book “Minamata” (and the life rights of the author), about the experiences of journalist W. Eugene Smith photographing mercury poisoning victims in Japan. He wrote the screenplay in six weeks, and it got him a literary manager. Then Johnny Depp’s company came on board to produce with Depp himself as the star. “Minamata” premiered at the Berlin Film Festival in 2020 and is now an Oscar favorite, streaming on HULU, Amazon Prime, and iTunes. It also stars Bill Nighy, Hiroyuki Sanada, Tadanobu Asano.
His follow up, DREAMERS (based on the book “John Lennon Vs. The US”), is about John Lennon’s immigration battle with the Nixon administration which legally set the stage (many years later) for DACA/The Dream Act.
David was recently hired by the director of “Minamata”, Andrew Levitas, to rewrite a script about the two brothers who owned Adidas and Puma and who battled each other for decades. That project, “Adidas V Puma”, is currently out to actors and mentioned in “The Hollywood Reporter” in early March 2021.
***
“We have been in the movie business for many years at its highest levels. Together we have read many thousands of screenplays and we are tough critics who are not easily impressed. However, when we read DREAMERS, we knew that we had found a bright, new screenwriting talent in David Kessler. His ability to bring new insights to historical characters and a story that we thought we already knew is a quality that is rarely found and should be treasured when it is.” – Rick Nicita (Hacksaw Ridge) and Paula Wagner (Mission: Impossible I, II, III; The Last Samurai, Jack Reacher)

David Kessler is an absolutely incredible teacher. He makes class fun but is very direct, which I appreciate. I felt like he was holding my hand through it, but also wasn’t afraid to rip into my script in all the right ways.  I feel that he truly cares about my personal success, and gives notes that are very applicable. Sometimes vague or broad notes can drive a writer crazy, but he always gives you a strong sense of direction so that you know where to go and what changes to make. I would highly recommend his class or his private consulations. I will absolutely be sending in every script I ever write to David, until Hollywood catches up to what a gem he is and he has no more time for me.
— Dia Frampton

I have taken two courses with David Kessler, the feature development lab and the feature draft intensive. David has a friendly and jovial teaching style and his love for the craft was apparent from day one. He makes class fun and he really delivers solid and thought-provoking notes. His expertise is in adaptions, but he delivers great insights in all genres. I recommend his class to all writers who are in need of a guiding hand and a supportive attitude.

David was extremely prompt during the notes process and was able to adjust his feedback to make sure his advice served the writer’s vision and not just a paint by numbers idea of what a script should look like. The time spent exploring each project’s theme and core ideas resulted in one of the strongest groups of scripts I’ve ever seen come out of a single class. You should definitely check out David if you need a supportive space to finally get that idea out of the purgatory of your brain and onto paper.