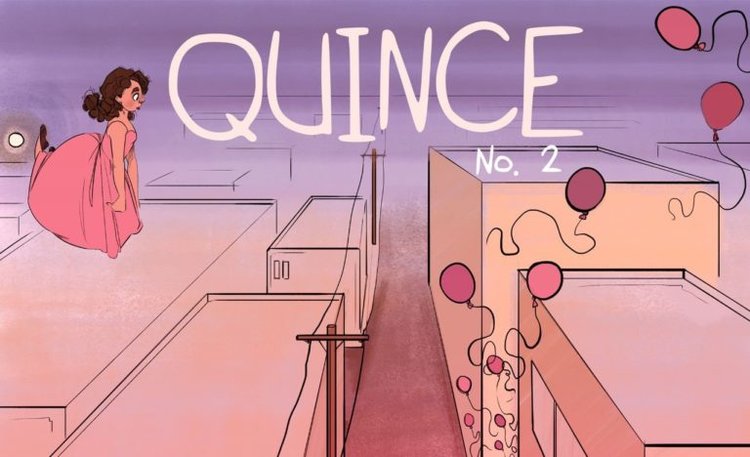 It’s that time of year again: the time when fellowship and contest results start to trickle in. For aspiring TV writers, this can be especially tough on the self-confidence, and no matter how many times you hear well-intentioned folks in your life talk about how these results are in no way a reflection of your talent, if your name isn’t on any semifinalist or finalist list, it may be a little harder to believe those words of encouragement than usual. We like to use this time of year as an opportunity to remind writers how many different ways there are to “break in” nowadays. The landscape of screenwriting and TV writing is constantly changing. Intellectual property is still a hot commodity, but the boundaries around what constitutes viable I.P. continue to explode, creating endless potential for crossover deals. Many writers are taking advantage of this by creating original IP, but you may be wondering how does one go about doing that successfully while still pursuing your creative and professional interests? This post features a profile on one of our favorite up-and-coming writers in town, Kit Steinkellner, who broke in without a coveted network fellowship or prestigious assistant job, and, best of all, didn’t have to sacrifice any of her diverse writing interests to do so.

Kit Steinkellner is a writer on Amazon’s Z: THE BEGINNING OF EVERYTHING with various projects in development repped by ICM Partners who’s done the unthinkable: getting staffed without working as a writers’ assistant or going through a network or studio writing program. Determined to create her own blueprint, Kit poured her energy and passion into an unexpected side project and created her own comic called Quince, which has enjoyed so much success that it took her to Comic-Con this year. Kit’s perspective on how Quince has shaped her creative and professional journey is a helpful reminder that there are many different ways to get from aspiring screenwriter to working screenwriter. 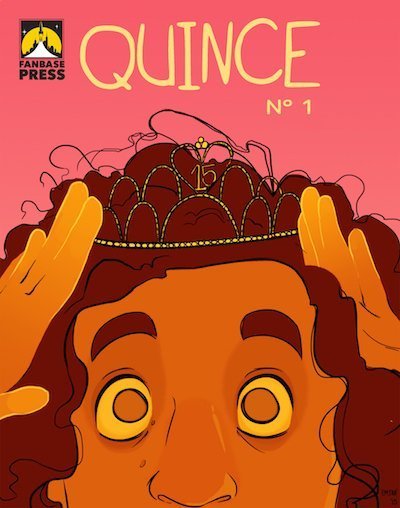 How did Quince come about? Was writing a comic something you’d always been interested in?

Oh man, let me try to make a long story a short story. So my sister Emma is an illustrator and I’m a writer and we’re 8 years apart and when she was in high school and I was in my early twenties we started collaborating on a webcomic called Aces about a high school newspaper, it was kind of like His Girl Friday meets Freaks and Geeks. We ended the series when Emma went to college, but we both wanted to work on something together again someday.

So this is where Sebastian [Kadlecik] comes in. I met Sebastian through doing weird underground theater with our friends at cARTel (Collaborative Arts L.A.). Sebastian is also a comics writer/illustrator, and we bonded over that. Two years ago, he sent me and Emma an e-mail, one of the best e-mails I’ve received in my life, up until this point. He said he has an idea for a comic called Quince, about a girl who gets superpowers on her quinceañera, when she turns 15, and only has her powers as long as she’s fifteen.

Sebastian is Latino, and the idea very much came from watching the girls in his family run around in Wonder Woman and Batgirl costumes and wanting them to have a superhero that looked like them and came from where they came from. It was important for Sebastian that this story came from a super-female place, and Sebastian had been an Aces reader and thought of us for the gig! It was a great meeting of identities, Sebastian, the creator, brought the core cultural aspect of the character and world and my sister and I as illustrator and writer brought the gender lens and with our powers combined we’re basically Captain Planet.

How does Quince round out your writing portfolio and relate to your brand?

The two things I like to write best in the world are huge and tiny stories. To be more specific, closely observed slice of life tragicomedies a la Transparent and Girls on the small side and sweeping, magical, heroes journeys a la Harry Potter and Buffy the Vampire Slayer on the big end of the spectrum. Most of the TV stuff I go out for is tiny, slice of life stuff, because the main TV sample I go out with is pretty much that.

For now, TV is where I do realism and comics are where I do all the crazy, heightened, magical shenanigans. As far as brand stuff goes, no matter what I write, women are front and center, they are funny, they are complicated, they are weirdos, and they are heroes. Whether I’m writing big or small, that is the through line in my work.

How did writing Quince offer you stability during the notoriously tumultuous and uncertain staffing process, if it did?

I was working on Quince before I got staffed/sold a TV project and after. TV is such a mercurial and unpredictable profession, and you can have a golden writing sample, give the best meeting in the world, and still not clinch a job because, I don’t know, they don’t have the budget for a low-level staffer, or someone else had more pertinent life experience or everybody likes you except for one person whom you remind of their ex-girlfriend, there’s just so many reasons why you don’t get a job that have nothing to do with your worth as a writer/human.

So, to have Quince has been so great, because no matter what happens with TV, I have this comic that I am over-the-moon excited about and proud of that I get to share with the world. It can be so hard as a TV writer, being a script on a stack of hundreds of scripts, not knowing if your script will every get made or if it will lead to a staffing job. But my comic did get made. It exists in the world. So that offers so much emotional stability right there. Financial stability, not so much, you don’t write comics to make, like, Scrooge McDuck pools of money. But I don’t think writing for money, having that be your driving force, leads to great writing anyway.

What creative or professional opportunities has being a part of Quince opened up for you that you may not have been able to experience otherwise?

We got to do Free Comic Book Day at Hi-De-Ho Comics in Santa Monica this year! And we did a Quince panel and signing at San Diego Comic Con! Our trade paperback comes out in October! So many bucket list items! 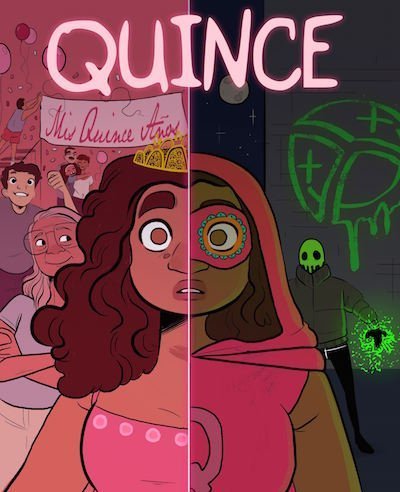 Lastly, we have plans to adapt Quince for the small screen, and we’re currently meeting with potential partners. We’ve essentially created our own IP, and it can be easier to sell something based on IP than original ideas. I get it, this is a business, and buyers feel more secure with stories that have passed muster in another medium. So it’s been really cool to go out with this proven package, that’s been a super-positive experience.

Quince has given me so much! I will never be able to repay my comic!

How did writing something other than a TV pilot or feature screenplay make you feel when you started? Was it daunting? Freeing? Fulfilling? Full of FOMO? Did you worry that you were “wasting time” not being active in the TV space?

I’ve always liked hopping from medium to medium. I started out as a playwright, did film/TV, I have a secret novel I work on when I have time, and obviously, comics. I am always daunted/fulfilled when I’m working on something I care about deeply, so my stomach would be in knots no matter what medium I was working in!

I will say I definitely feel like being a TV writer has made me a better comics writer, and vice versa. Writing for the screen taught me to be economic in my language and leave a lot of white on the page. And that’s been so important for my comics writing, because I want to keep my dialogue tight so that Emma has all the space she needs to work her illustrating magic! On the flip side, comics are such a visual medium, and writing for them has had a cinematic impact on my TV writing, for which I am very grateful.

I’ve never felt like I was wasting time writing comics, mostly because they don’t take that long to write compared to other mediums! It’s not like holing up to write a novel or an opera. Also, I freaking love writing my comic, and it’s hard to feel like you’re wasting time when you’re madly in love with the thing you’re working on. 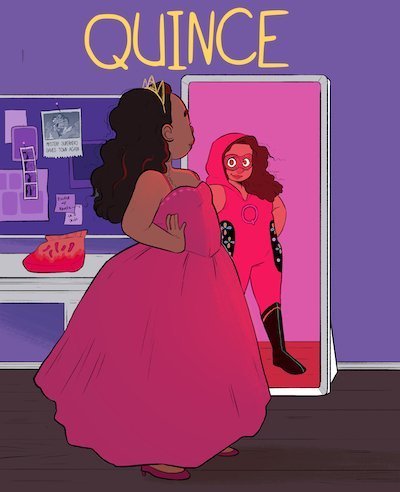 When does the next issue of Quince drop and what’s the easiest way for people to read past issues so we’re all caught up?

Quince comes out on the 15th of every month through Comixology. If you haven’t used Comixology before, it’s super easy, you can log in through your Amazon account, it takes two minutes. It comes out in English and in Spanish, and we’re so proud of telling this story in both languages. Issue by issue, it’s a digital comic (We’re on Issue 6 as of this writing.) Then on October 23rd, 2017 when the run is concluded, we’ll be issuing a trade paperback, which I am way too excited about. You can preorder the trade paperback through Fanbase Press. All our info is on our website www.quincecomic.com, our socials (Facebook/Twitter) are “quincecomic,” we’re very easy to find on the Internet.

We learned two things from talking to Kit Steinkellner about Quince. First, as long as you are persistent and truly following your passions, you don’t always need access to a “conventional route,” like a prestigious fellowship or assistant position, to break in.

Second, be true to who you are and what excites you. IP may be a hot trend in town, but, just like anything else, if your heart isn’t really in it, people will be able to tell. Kit didn’t decide to write Quince because she thought it would get her staffed; she did it because she’s always loved comics and was passionate about the idea and her collaborators. And coming from someone who’s read the actual comic, Kit and Sebastian’s love for the characters and the material shines through as brightly as her sister’s lovely illustration.

We know how annoying it is when you’re still breaking in to hear people tell you to “just be yourselves.” But in the end, that’s what will serve you. By telling stories you’re truly passionate about, across whatever mediums interest you most, your writing portfolio already has the most powerful and marketable connective: your passion.