Connor Pritchard grew up in the San Francisco comedy scene with comedians as his babysitters. He had no chance at a normal life. 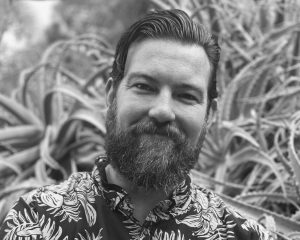 But nevertheless, he made it through school, ultimately studying history at Loyola Marymount University.

After college, he was drawn back to the family business. Connor became a production assistant on reality shows. Then he started producing his own comedy shows and web content that eventually led to him co-creating his first TV show, Workaholics (Comedy Central). After that, Connor created Let’s Get Physical (Pop TV), where he was the showrunner.

In between shows, he’s a freelance creative for Beats by Dre, he self-publishes books and he hosts bibliotherapy workshops on Airbnb. He’s a gentle giant book nerd who loves helping people solve their creative problems.

He’s repped by Untitled Entertainment, and you can find him on Instagram @connorpritchard (The Barbarian Librarian)

My experience with Connor’s Televisionary class was excellent. I took a very lengthy (and expensive!) year of classes in TV writing with another program and it wasn’t nearly as informative as this 6-week class with Connor.
Connor was very complimentary and encouraging, while also giving plenty of notes/pitches that were well thought out and very helpful in building the world of my show. He led the class with a laid back, yet professional vibe and gave equal time to each student (not easy to do via Zoom). Connor would often log on early and stay late to answer questions. As a teacher myself, I was very pleased with the Script Anatomy curriculum and the way it was designed. Connor set the bar high!

Connor could not have made the class more comfortable more quickly! He’s great. He’s both willing to talk about himself and his experiences AND he makes space for the members of the class. He knew everyone’s names by the end of the 1st class and was referencing us specifically and he knew everyone’s project by the 2nd class and was using people’s stories as examples for what we were learning. He created a great classroom rapport where it was obvious people felt taken very seriously.

I took the Televisionary class with Connor and I loved it. This was my first Script Anatomy class and I learned so much! It was very neat to learn the Script Anatomy tools in the lectures and apply them to our own projects while doing the homework assignments. I had a rough idea of my story and the main characters before I took the class. With Script Anatomy tools and Connor’s insights, I was able to take that premise and create a strong outline for it. Connor gave valuable feedback each week on our assignments and pitched us ideas on character traits, situations, structure, etc… to help develop the pilot. I am currently writing the script and it feels almost seamless since the outline is so well developed, thanks to this class. I will be using the tools and the lessons learned in the class for my future pilots as well!