Before getting staffed as a writer Cole did a whole lot of assisting. Ten years! Talk about paying your dues. 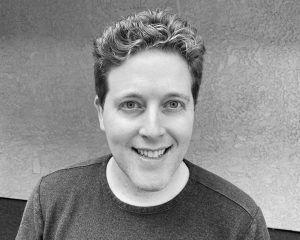 Originally from Austin, Texas, Cole broke into the business as a showrunner’s assistant on the ABC drama Brothers & Sisters. He then served as a script coordinator, writers’ assistant, and producer’s assistant on many shows including Stranger Things, How to Get Away with Murder, Scream, Twisted, and Fringe.

During that decade, Cole worked consistently on his writing. He won Scriptapalooza TV 2012 for a spec script of The Good Wife. And in 2018 he won a place on the Writers’ Assistants Network Writers Workshop with his pilot Hollywood Hustle.

His writing career finally began when he was promoted from writers’ assistant on the Freeform drama Siren, to staff writer. He’s now a story editor on Season Three. Cole also wrote the Fringe comic entitled “Imagine If… Walter Outlived the Earth,” available through DC Comics, and wrote for the web series Coffee Talk which won Official Selection in the Queer Bits Film Festival and Desperado LGBT Film Festival.

Cole primarily writes character-based drama, Young Adult, and fantasy. He is repped by Kaplan Stahler Agency, Industry Entertainment, and Inclusive Management. You can find him @coleman220 on Twitter.

I came to Script Anatomy very green, having never written a script. Frankly, my confidence was pretty low, and I was super unsure of my ability to write an entire screenplay. Then I entered Cole’s TV Pilot Lab with a script I’d worked on in a previous class. Not only were Cole’s classes engaging, but his notes were also detailed and thoughtful. So after my first TV pilot class with him, I decided to invest in a private consult.

Again, his notes not only helped make my script better, but he gave me advice on what I should be reading (any pilot I could get my hands on) and doing to continue to learn the craft of screenwriting. As a result, I submitted my first pilot ever to the Austin Film Festival, and it made it into the second round of the contest. I have since taken another class with Cole to work on my second pilot and recently followed up our class with another private consult. He is truly someone who brings out the best in you with notes that make you better as a writer, and I am grateful that I’ve been able to learn so much from him on this new journey.

Cole was a great teacher, that really took the time to understand what everyone in the class wanted for their stories. Every class was engaging, and tailored to things he noticed from our writing. I was able to turn my outline into a full drama pilot script that I can be proud of, and a lot of that is due to Cole’s guidance. Every week it was clear he took the time to read through my drafts carefully, and gave insightful notes and thoughts that came from a place of wanting to bring my script to the next level. Script Anatomy never lets me down with classes that consistently improve my ability to write, and this Draft Intensive course was no exception! I hope to have the chance to take another class with Cole soon, and can’t wait until my next Script Anatomy class begins.

I can’t recommend Cole enough for both classes and consults. The level of care and detailed feedback he gives is unparalleled. He is an expert at helping you find your unique voice while simultaneously building out solid structure. I worked on two different pilots with Cole, and his passion and collaborative spirit made the writing process feel more manageable and fun. Cole took my work to the next level and got my pilots polished and ready for competitions and submissions. Don’t miss out on the opportunity to learn from him. Cole’s a gem!