In 4th grade, Brandy Finmark’s mom picked her up with a new man in the car and said, “this is your new dad”. But Brandy knew better; there would be many new dads to come. 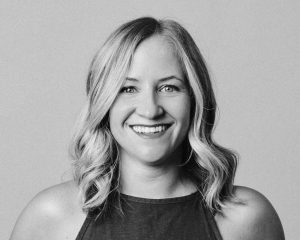 Brandy’s made a career out of making sad things funny. She grew up in the small meth-filled town of Simi Valley, California, and  attended a 2-year college for 5 years because if you’re gonna do something, do it right. She wrote one act plays and comedic monologues and joined her first improv group. From there, she attended the New York Film Academy in Burbank, studied sketch comedy at UCB and improv at IO West (RIP).

In 2013, she met her writing partner, Jessica Blackwell, who she still collaborates with today.

In 2016, the writing duo wrote and sold a sketch to Comedy Central called “The Glass Ceiling Board Game for Girls” which went viral. Shortly after, they sold their first spec script to Paramount Studios in 2016, with Paul Feig’s company Feigco attached to produce.

Brandy and Jess sold a comedy feature to Freeform in 2019 and the following year, they sold a comedy pilot, again, to Freeform. Most recently, Brandy and Jess teamed up with another writer, Nora McInerny, and sold an hour-long comedic series to FX, which is currently in development. Brandy and Jess currently have a feature in development at Paramount, and this past April, Brandy sold her first solo project, a horror comedy feature, to Blumhouse. Brandy has staffed on Chelsea (Netflix), Crank Yankers (Comedy Central), and Crossing Swords (Hulu).

The features class was phenomenal. Brandy and Becca are huge fans of film and so knowledgeable. Their enthusiasm was infectious and made the class so fun. If you want to learn structure and character for features, take this class!

I took Script Anatomy’s feature writing class taught by Brandy Finmark and Becca Gleason. Brandy and Becca are so cool and funny that I looked forward to each class and wanted them to be my best friends! I learned so much in this class. Brandy and Becca methodically go through the mechanics and break down every component and step of writing a successful feature, removing the guesswork and making the process feel very manageable. Their love of movies and passion for dissecting character arcs, story structure, what works and what doesn’t work is amazing. If you are intimidated by writing a feature or just want to get helpful notes from professionals and hard deadlines to start your next spec, then take this class immediately!

No matter if this is your first script or your tenth, Brandy freely shares her infectious enthusiasm for movies and her hard-earned experience to all her students. The feedback I receive from Brandy manages to get me unstuck and out of my own way, enabling me to produce work that I’m proud to sign my name to.  She’s one of the few working screenwriters who makes time to teach up-and-coming writers while juggling multiple projects in development.