Ben Blacker is the co-creator, with writing partner Ben Acker, of the Thrilling Adventure Hour, a staged show and podcast that ran for ten years to sold out crowds, garnering acclaim from the LA Weekly to Rolling Stone. 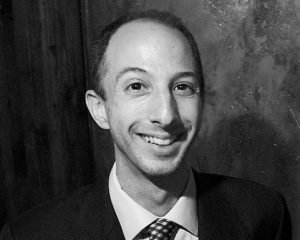 That show led to all kinds of opportunities. Acker & Blacker have been staffed on Supernatural, Puss In Boots and FXX’s Cassius and Clay. Their 2020 Audible series, Cut & Run, about best friends who are kidney thieves, stars Meg Ryan, D’Arcy Carden, Sam Richardson, and an all-star cast. They’ve developed a dozen pilots for networks including USA, Fox, AMC, and Nickelodeon, are currently in development with CBS Studios on an action-comedy feature and with Echoverse on a horror drama audio series, and they’re the authors of the Star Wars: Join the Resistance series, canonical novels set in the Star Wars universe, not to mention comic books for Marvel (Deadpool; Thunderbolts), DC (Blacker created the series Hex Wives), Dynamite (Flash Gordon), Image, and Boom! Studios.

Originally from Boston, Ben studied at Syracuse University where he met his writing partner and graduated from Emerson College where he learned how to write. He worked as a high school and middle school teacher at first, before becoming a full time writer.

Now based in LA, Ben is the creator and host of the Writers Panel, a podcast in which he talks about the business and process of writing television with fellow TV writers. At 500 episodes, it’s the definitive insider’s guide to our current golden age of television. He’s also the co-producer of Dead Pilots Society, the live show and podcast in which pilots by professional writers that were bought and developed but never produced are given the table reads they so richly deserve.

Blacker and his wife are the co-owners of HouseSeats.live, a virtual venue on which he’s produced such shows as Ted Danson & His Friends from Work (featuring reunions of casts from 3 Men and a Baby and Cheers),  Heat Vision and Jack (starring Jack Black, Taika Waititi, and Jon Hamm), and Crisis on Infinite Teen Dramas (co-produced by Greg Berlanti). In 2020, HouseSeats.live raised a million dollars for various organizations including Feeding America and the Biden campaign.

He is repped by FWRD Mgmt and you can find him on Twitter @BenBlacker.

Ben totally lived up to my expectations. He was so fun and he gave excellent feedback. He didn’t hold back on giving us the feedback we needed. I will not make it in this business if I don’t hear what is expected of me, and Ben was straight with me from the start. He always pointed out when things in my story lacked or if he thought I could go farther. In fact, I liked working with him so much that I signed up for a follow-up consultation with him to get my draft even better. Ben is a great teacher; you can tell he cares and wants his students to improve.

Ben is an incredibly smart, perceptive, and empathetic instructor. His teaching style is a refreshing combination of experience and enthusiasm. His feedback is inspiring. He knows what works and what audiences respond to, but he doesn’t turn that knowledge into rules or formulas. He always considers the student’s distinct goals when it comes to their script, and his feedback is centered on ensuring the script will become the optimal version of itself.