Becca grew up in Cincinnati, Ohio, and she wants everyone to know how good the chili and ice cream is there. 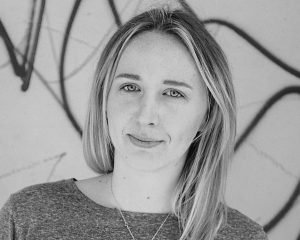 She went to college at both Boston University and University of Cincinnati where she finally decided she was sick of being away from all the real creative action. So, she moved to LA and landed an internship on the NBC show Community, which, after a season, turned into a real, paying assistant job. (She was still poor, though, and managed to survive by stealing sandwiches from craft services).

From there she bounced around working in development while writing and directing short films, three of which made the rounds on the festival circuit at places like Sundance and SXSW. Her directorial debut, “Molly,” won the LACMA Young Directors award, and her second short, “We,” sold to Sundance Now for TV development. Since then, she’s written and directed a series for YouTube called The Commute produced by Viacom.

Becca recently directed her first feature, SUMMER ‘03 which premiered at SXSW and sold for distribution to Blue Fox Entertainment — you can currently watch it on Amazon Prime. Even more recently, she’s been showrunning a project for Disney + as well as developing another show for IFC with Michael Showalter starring Anna Camp.

The features class was phenomenal. Brandy and Becca are huge fans of film and so knowledgeable. Their enthusiasm was infectious and made the class so fun. If you want to learn structure and character for features, take this class!

I took Script Anatomy’s feature writing class taught by Brandy Finmark and Becca Gleason. Brandy and Becca are so cool and funny that I literally looked forward to each class and wanted them to be my best friends! I learned so much in this class. They methodically go through the mechanics and break down every component and step of writing a successful feature, removing the guesswork and making the process feel manageable. Their love of movies and passion for dissecting character arcs, story structure, what works and what doesn’t work is amazing. If you are intimidated by writing a feature like I was or just want to get helpful notes from professionals and hard deadlines to start your next spec, then take this class immediately!