Growing up in a sleepy beach suburb of Los Angeles, April Shih entertained herself by catfishing people in AOL chatrooms. 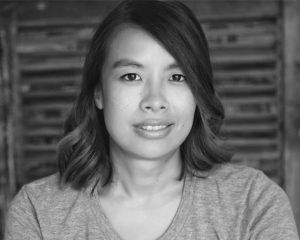 This urge to make shit up turned into a passion for filmmaking, film school at NYU Tisch School of the Arts and then several years working in the indie film and theater world, wearing every hat imaginable. She edited actors reels, served as a proxy for James Franco in his classes at UCLA, and produced the Ovation Award-winning revival of Kiss of the Spiderwoman: The Musical. Then she decided to Eat Pray Love her way to Las Vegas where she spent two years playing poker for a living.

Returning to writing in 2017, April graduated in Playwriting from Cal State Northridge and was soon selected by a whole pile of fellowships – the CAPE New Writers Fellowship, Sundance Episodic Story Lab, the inaugural Film Independent Episodic Lab, and the CBS Writers Mentoring Program. She was also a recipient of a Sundance Advancement Grant in support of her project TILTING. All of which led to her first job as staff writer on the FXX comedy You’re The Worst.

She has since written on Mrs America on FX, starring Cate Blanchett, Amazon’s Undone, and developed a cable series with Larry Wilmore and The District for ABC Signature. She is currently a producer on Evel Knievel (USA).

The Script Anatomy process is amazing. I really feel like I can write any script from here on out using their process. I can see that this will help a writer once they get staffed too because it really breaks story in such an amazing way. I’m already in the next class writing the pilot. I’m excited to see a first draft! Great classes! Thanks!

Working with April on this script was a dream! She brought incredible insight to the characters, the structure, and really helped me hone in on the theme and what I wanted this project to ‘say’. April’s notes were soooo detailed and actionable, and there is no way I’d have this strong of a draft without working with her on this project. I am so grateful to Script Anatomy for your consultations and all of your wonderful classes!

The system at Script Anatomy for the Televisionary class is streamline, elegant, and rigorous. Each week we were met with assignments that deepened the understanding of our OWN stories.