Amitabh began his film career as a prop builder in Sydney, Australia. He was working on a luxury car commercial when the star, Ed Harris, urged him to apply to USC film school. 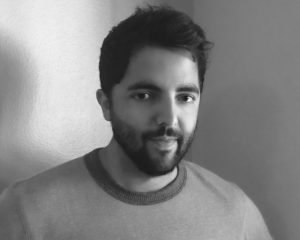 An Iowa-born, first-generation, bi-racial writer-director, Amitabh earned his MFA from USC’s School of Cinematic Arts with the competition of his thesis short film entitled “The Art of Stalking,” which he wrote, directed, and edited. An exploration of toxic masculinity—influenced by Taxi Driver and Carnal Knowledge—it was the recipient of Panavision’s New Filmmaker Grant, and enjoyed a three-year festival run kicked-off by winning the Boston Film Festival (Best Short, 2007).

After a stint directing and producing branded content for clients like The Obama Administration, Sperry Shoes, and Complex Magazine, Amitabh broke into television with the sale of his original one-hour pilot, Swing State, a political sex drama, to Bravo in 2015. Later that year, Amitabh adapted Kevin Roose’s New York Times Bestseller Young Money into an eponymous one-hour finance drama at TNT, then developed an original idea from executive producer Whoopi Goldberg into Harlem, a one-hour crime drama, again at Bravo.

During this period, Amitabh also volunteered for a political consulting group comprised of high-level writers and showrunners, meeting with many United States Senators and Representatives in an effort to strengthen their political messaging. In 2019 he made the final round of Disney-ABC’s Drama Writing Program, and in 2020, Amitabh made his television directing debut with BET’s half-hour comedy All The Way Black.

Most recently, Amitabh finished writing Baku, a supernatural psychodrama steeped in his love for post-war Japanese Horror Cinemas, which he is attached to direct.

He is repped by CAA and you can find him on IG at @amitabhklemm.

Amitabh empowered myself and the whole class to level up as writers. I was the least experienced in the class and never felt left behind. Despite the lightning fast pace of this class, we all felt supported by Amitabh’s on-point notes and friendly class environment. Thanks to him, I will never write boring and polite dialogue again!

— Lucky Benson, Visual Editor for The New York Times
Amitabh was a hell of an instructor and teacher; Infinite knowledge on the writing process and industry as a whole, incredibly generous with information, and very patient and respectful. I’m a first-time writer. I was scared out of my mind before our first class. After the first week, I had been so impacted and empowered by this class, that I immediately upgraded tiers. This class really opened my eyes, not only in terms of learning the structure and organization of screenwriting, but in recognizing my own passion for personal storytelling and how to bring it to life.
— Rodney Richardson
View Amitabh's Upcoming Classes