Ali Laventhol got her start in show business working on huge movies like Terminator: Salvation and Pirates of the Caribbean. Only not as a writer. 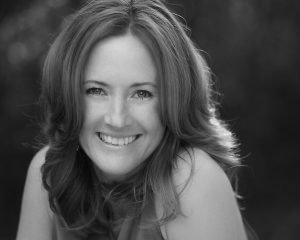 She was a Visual Effects Compositor working on the “flame” while privately pursuing a dream to write for TV.She soon teamed up with Tawnya, her writing partner, and their careers have gone from strength to strength. The break came when their Nurse Jackie spec was selected for NBC’s Writers On the Verge Program in 2010. Representation followed and then their first job as staff writers on Fairly Legal.

Since then, they have written on Famous In Love (Freeform), The Night Shift (NBC), Perception (TNT), The Client List (Lifetime), A Million Little Things (ABC), Ginny & Georgia (Netflix), Salsa (Apple), My Life With The Walter Boys (Netflix), and Bel-Air (Peacock) where she is a Co-Executive Producer. Ali is a former reader for WOTV submissions, scoring and writing coverage.

Also a former competitive equestrian and yoga teacher, she’s worked for the gun control lobby, rescued dogs, climbed pyramids and held her Dad’s hand as he took his last breath. It’s a life she now puts into her writing.

She is repped by UTA, Industry Entertainment, and Morris Yorn.

Script Anatomy has made me a much stronger writer. I have won and placed in multiple contests with scripts I’ve written in their classes. I can’t recommend them highly enough! I’ve taken the Televisionary class and the Draft class with Ali and both times I’ve been impressed by how she maintains a warm and encouraging environment while giving you the tools you need to take your material to the next level. She is experienced and knowledgeable about story and she doesn’t just find what’s not working, she helps you fix it.

— Rowan Wheeler, "UNDER A ROCK" with Tig Notaro

I’ve taken classes outside of Script Anatomy but I always go back because Script Anatomy classes are just more professional and the atmosphere is more serious and structured. We don’t run late, or go off topic, and that’s because of instructors like Ali. She runs her class like a writer’s room, it’s like practicing for the real deal. She’s very attuned to the story you’re trying to tell. Her notes are specific with ideas on how to elevate your work, she’s honest about killing your “precious darlings” and she does so in an absurdly patient manner.

Ali’s a great teacher. She gets right to the heart of a story. Her approach is focused on identifying and building upon meaning and relationship progressions, with an appreciation for structure. With patience and warmth, she runs her class like a professional writer’s room. And you have to come prepared. That’s how you get the most out of it.  I have loved every single class I’ve taken at Script Anatomy, and I can’t wait for my next one with Ali.